Enjoy an array of battles! Freely configure characters, stages and rules, play solo or co-op, and even challenge your friends in local multiplayer. You can also connect to the network to challenge players and friends across the globe.
Note: You must sign into PlayStation™ Network. 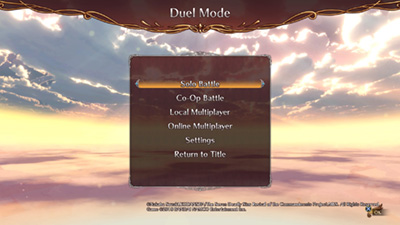 ●Solo Battle: 1-on-1 versus mode against a CPU opponent.
●Co-Op Battle: Choose a partner to fight against CPU opponents in a 2-on-2 team brawl.
●Local Multiplayer: Fight against a friend in a 1-on-1 versus battle.
Note: Two DUALSHOCK®4 wireless controllers are required for this mode.
●Online Multiplayer: Lets you connect to the network to take on players across the globe.
●Settings: Change settings for displaying text, volume, camera and your controller.
●Return to Title: Return to the Title Screen.

A mode that lets you fight CPU or human opponents in a 1-on-1 battle.

Players first select the character they want to control. When you select and confirm a character, that character profile appears as 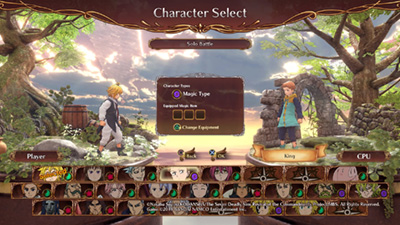 Selecting a character will display their type and equipment in the centre of the screen.
You can change your character’s equipment at this time by pressing the 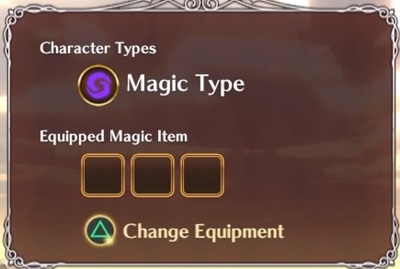 Equipment characters use in Duel Mode differs from that in Adventure Mode. You cannot use Magic Items that are useful to the journey. 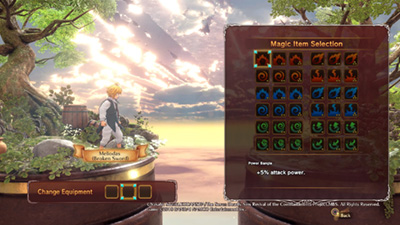 Choose a character for the computer to control. Once you do (and both players have chosen a character), you proceed to the stage select.

Set the stage, CPU level and time. Press up and down on the directional buttons or left stick to select an option, then change settings by pressing left or right. The stages you can select increase as you progress through Adventure Mode. In Local Multiplayer, Player 1 will choose the settings. 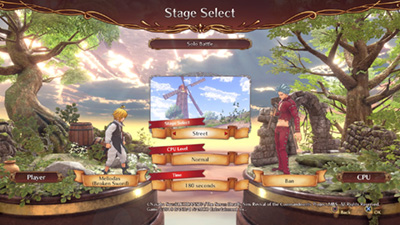 After the battle, you will return to the Solo Battle (Local Multiplayer) character select screen. 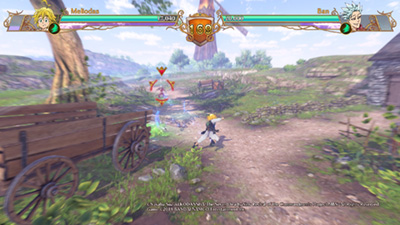 A 2-on-2 team battle mode played with a CPU partner of your choice.

First, the player chooses a character to control, then a character for the CPU to control. Both character and partner equipment can be changed during selection by pressing the 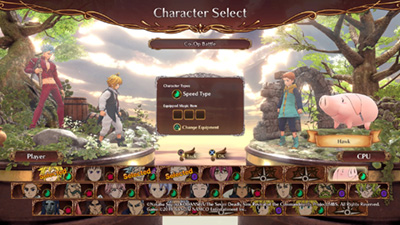 Choose a character and partner for the CPU to control, then proceed to the stage select.

Set the stage, computer level and time, then press the

After the battle, you will return to the Co-Op Battle character select screen. 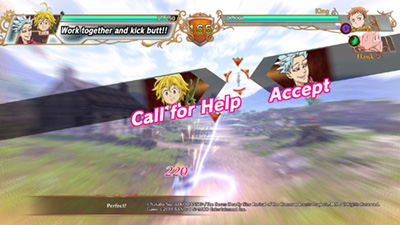 Connect to the network to challenge players across the globe.
Note: You must be a PlayStation®Plus member and signed into PlayStation™ Network.
The Online Multiplayer menu will appear once you sign in.

In Solo Battle (Co-Op Battle), you select a character, enter the network lobby, and go to the standby screen. Selecting a character at the character select screen will display their online ID, player level and power level in the centre of the screen.

Select the stage while waiting for Friends to join the room.

The battle will start when all Friend players have joined the room.
After the battle, you will return to the network lobby.