While in the lobby, you can move your Lobby Character around to interact with other players and access different game modes.

Interacting with Other Players

You can communicate with other players in the Online Lobby using preset messages and Z Stamps. Press the

button to pull up a list of preset messages, and press the 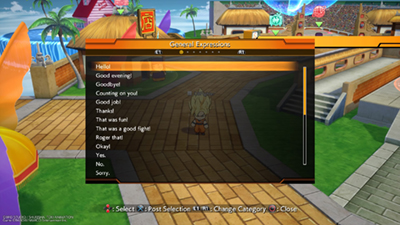 The various modes of the game can be accessed by speaking to the receptionist in front of each facility in the lobby. You can also press the

button to view a map of the entire lobby, where you can then select any facility and warp there instantly.
Note: When playing offline, some facilities will not have a receptionist and thus cannot be accessed. 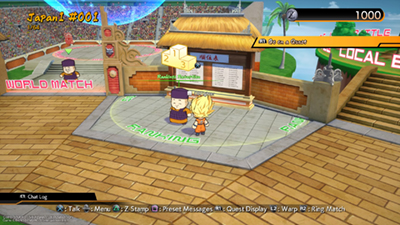 While in the Online Lobby, you can create a „Ring,” a special group where you can recruit other players to join you in battles known as Ring Matches. To play in a Ring Match, you will need to either host your own Ring or join another player’s Ring. There are two types of Ring Matches: a one-on-one normal Ring Match and a three-on-three Ring Party Match.
Note: There are two options available when joining a Ring Party Match: „Select Team,” where you can select which team you would like to join, and „Shuffle,” where you are randomly assigned to a team.

To create a Ring, press the

button to access the Ring Settings screen, where you can customise various aspects of your Ring, such as how many players can join, battle rules, and desired skill level of players. Once you’ve finished making your selections, choose „Create Ring” to generate a circle around your Lobby Character. To join a Ring, enter the circle around another player’s Lobby Character and speak to them. Ring Matches can be performed from the Ring Match screen.
Note: You cannot join a Ring that has already reached its maximum number of players. You can also restrict who joins your Ring by requiring that a password be entered to join.

Creating or joining a Ring will bring you to the Ring Match screen. Highlight your team on the player list and press the

button to select from three different seats: Battle Seat, Standby Seat, and Spectator Seat. How a match is started will change based on the battle rules.

Ring Match : Select a Battle Seat to begin a match. Once your opponent has selected a Battle Seat and you are both „Ready for Battle,” the match will begin. If all Battle Seats are full, you’ll be placed in a Standby Seat until a Battle Seat is available. You can also watch matches between other players by selecting a Spectator Seat.

Ring Party Match: Choosing „Select Team” allows you to pick members for your team with the battle starting once a total of six players have joined. Choosing „Shuffle” will randomly assign players to teams before starting the battle. You can also watch matches between other players by selecting a Spectator Seat.

button to close (if the host) or leave (if a guest) a Ring.

Completing quests will earn you Zeni and other rewards. You can view the details of your quests by pressing the

button. You can also complete tutorial quests to unlock special daily quests in the Online Lobby that offer something new to do every day. 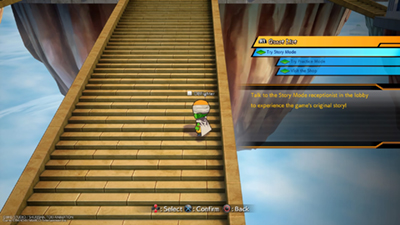 Press the OPTIONS button to access the pause menu, where you can change various game settings and view details on quests and other players, among other things. 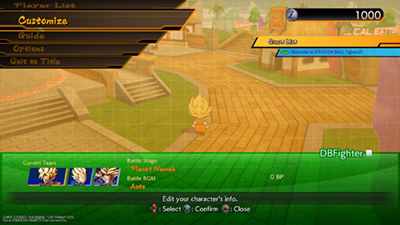