Health Gauge: The uppermost gauge at the top of the screen is your current character’s health, while the gauges below are your allies’ health. When your current character’s health gauge reaches zero, one of your allies will automatically enter the fight.
Sparking! Icon: Sparking Blast can be used when this icon is glowing.
Ki Gauge: Slowly fills each time you attack your opponent or when they attack you. The number next to the gauge will increase each time the gauge is filled (7 max). You can then use your filled gauges to perform Super Attacks and other powerful actions.
Timer: The match will end when the timer reaches zero, and whichever fighter has more total health remaining will be declared the winner.
Note: In Story Mode, you will lose the match if the timer reaches zero regardless of your remaining health.
Dragon Balls: You receive one Dragon Ball for performing Super Combos or achieving a set number of hits on your opponent. Once you’ve collected all seven, you can execute a special action to summon Shenron.

Each team can have a maximum of three members. If there are two or more members on your team, you can switch to a different character during battle. Once a character is switched in, the previous character’s face icon will darken and slowly light up over time. That character cannot be switched to until their face icon is fully lit. 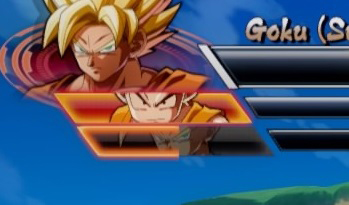 Once you have collected all seven Dragon Balls, you can summon Shenron by performing a Super Combo when you have seven Ki gauges (

button version).
When Shenron appears, you will be presented with four different wishes. Select the wish you would like to make before time runs out with the directional buttons or the left stick. 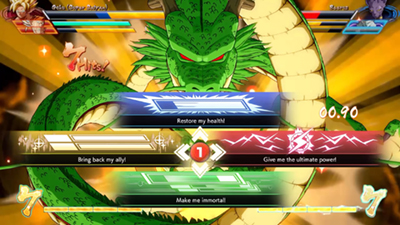 Give me the ultimate power!: Gain one Sparking! Icon.
Bring back my ally!: Revive one KO’d team member with 20% of their health.
Restore my health!: Completely restore your current character’s health.
Make me immortal!: Set all team members’ health gauges (blue sections) to automatically recover over time.