Speak to the receptionist and select ‘Begin Story’ to start the story. The story is broken up into three different arcs. You can only access the Super Warrior Arc at first, but the other arcs will become available as you progress through the story. You can select from the following options to view previously-watched story scenes or view information on your current characters. 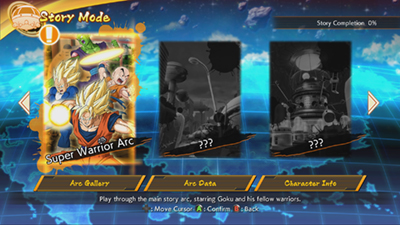 Select ‘New Game’ to start playing through the story from the beginning. You can resume the story from where you last saved with ‘Continue’. To replay a map that you’ve already completed, choose ‘Map Select’. 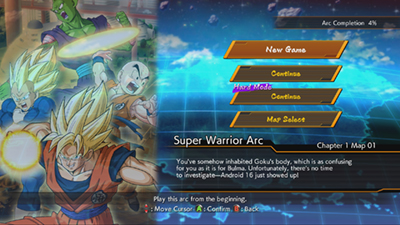 Playing through an Arc

Each arc is further divided into chapters and progresses through the three following types of screens. Defeat the boss of a map screen to complete that map and move on to the next one. You’ll only be able to play as Goku at first, but you’ll gain access to more characters by completing maps and rescuing allies. 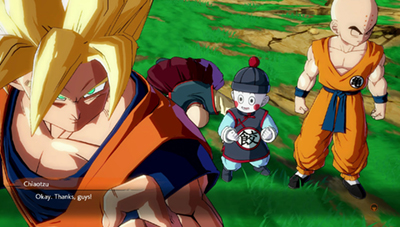 Watch an event scene with characters from the story. 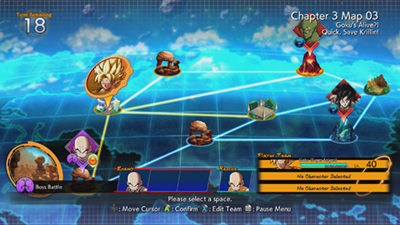 Move across spaces on the map to make your way to the boss space. Moving to a space with an enemy or boss on it will trigger a battle. 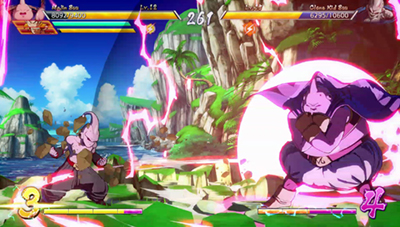 Engage the enemy in battle. Defeat all of your opponents to earn EXP, rescue allies, etc.

button to advance the dialogue. Press the

button to view a back log of previous dialogue. You can also skip dialogue scenes by selecting ‘Skip’ from the pause menu. 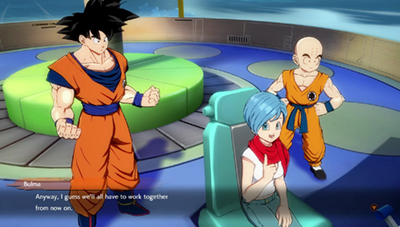 Select spaces on the map to progress the story and make your way to the boss space. Moving one space will decrease your remaining turns by one, and letting the number of moves reach zero will result in a Game Over. Defeat the boss of the map screen to complete the map. 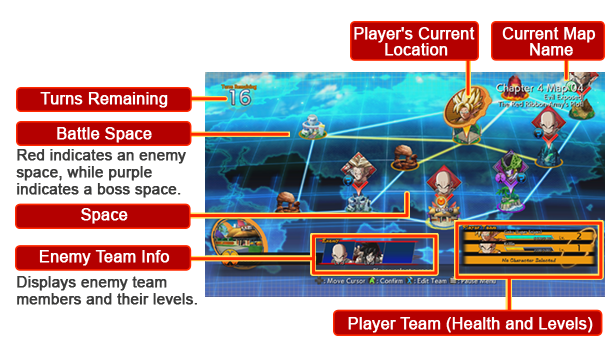 You can adjust various game settings, select ‘Retry’ to start the map over from the beginning, or save your current progress and exit the game.

Battles play out differently depending on the icons that appear on each battle space.

Rescue Event: Win the battle to rescue an ally and add them to your list of playable characters.

Boss Battle: Win the battle to complete the map.

Battle Tutorial: Win the battle after completing all tutorial objectives to receive a reward.

Buu Battle: Fight a clone of Kid Buu and defeat him to receive a large amount of EXP.

Battle: Fight in a normal battle.

Moving to a battle space will trigger a battle with an enemy team. The results of the battle will be displayed once the battle is finished, and you will receive EXP, Zeni, and/or skills if you are victorious. If the battle was part of a Rescue Event, you will also unlock a new playable character. Continue earning EXP to increase your characters’ levels and raise their abilities.
Note: You will lose the battle if all of your team members’ health reaches zero or time runs out. 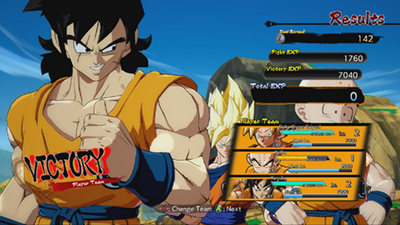 Allies will recover a set amount of health at the end of each battle won. Any allies whose health reaches zero will be unable to fight in future battles. You can revive an incapacitated ally by switching them out and winning other battles with a different ally.

button on the map screen to edit your team (Player Team), equip skills or items, or view ally stats. To change a team member, either select ‘No Character Selected’ from your Player Team or choose a specific character you would like to add to your team.

Getting a Game Over

Running out of turns on the map screen or losing all available allies will result in a Game Over. You can try to complete the map again from the beginning by selecting ‘Retry’. 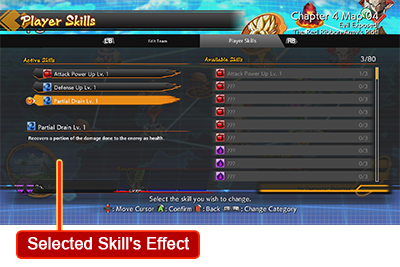 button on the Edit Player Team screen to view your current character’s stats and boosts. Each character has six stats, all of which increase as their level increases. 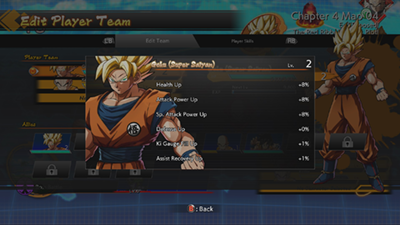