This game allows up to four players to play simultaneously on the same Xbox One, during battle.

Xbox One has wired and wireless controllers. You may need a special hub when playing multiplayer with wired controllers.

Connect the same number of Xbox One controllers as there are players. When three players play using wired controllers, plug in two controllers at the front of the console and plug in one controller at the back.

The first character on the Top Menu is 1P, second is 2P, and so forth. Characters 1P-4P are assigned to controllers in the order controllers are connected.

Set the playable characters’ control mode as Manual or Semi-Auto in the Artes Screen on the Options Menu before entering the battle.

Each player controls their respective character in battle. When the Battle Menu is displayed, only the player who brought up the menu can control it.
Note: When casting healing or beneficial arte, use the left / right direction pad to select the character that will receive it. 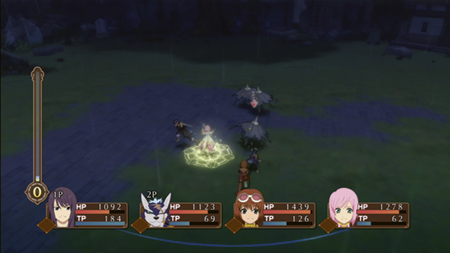