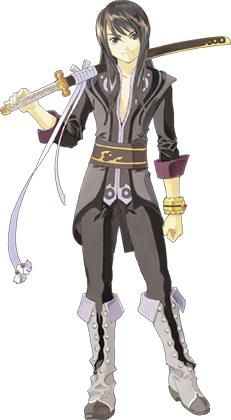 Having seen the horrors perpetrated by the ruling class, Yuri has come to despise the aristocrats and their ilk.
In response, he puts his skills as a former knight to good use in the lower quarter, acting as a bodyguard of sorts.
Despite his sharp tongue, he is actually a man who feels compelled to help those in need, a fact that has put him in the high esteem of his peers. 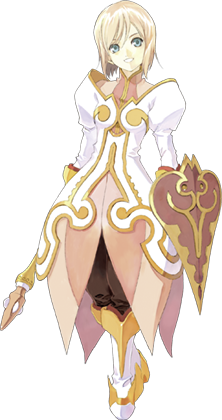 Estelle meets Yuri in a rather curious manner at her castle.
Her dreamy, detached demeanor often causes confusion amongst those around her. At heart she is incredibly earnest, and won’t hesitate to use her healing artes on a fallen ally, even if it puts her own life in danger. Estelle is actually her nickname; her full name is Estellise.

“We’re knights. With our swords, we protect the people. “

Flynn grew up in the lower quarter with Yuri, and now serves as a knight. He is determined to upend the current world order, earning him accolades in the lower quarter and scorn from the aristocrats. Though he often comes across as overly serious and inflexible, he is constantly at war with himself, caught between his beliefs and the rule of law. Flynn is preoccupied with Yuri’s well-being, which unfortunately manifests itself in lectures and scolding. 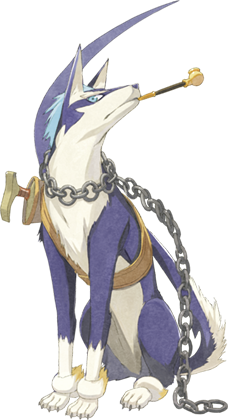 Yuri’s constant companion, a one-eyed dog with a big scar on his face. Though he holds a pipe as a memento from his former master, he does not smoke. He is not friendly but he never betrays anyone whom he has come to accept. He is totally in control and may be the most sensible and calm being among them all.

A member of the Hunting Blades guild. He is full of vigour, and uses huge weapons for battles. He follows Yuri and his associates around, for some reason. While he is full of bluster, he doesn’t strut his stuff. 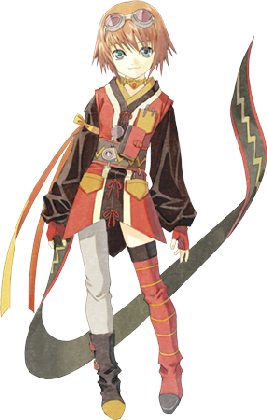 Rita is a genius and blastia researcher who will gladly tell you that yes, blastia research is a profession. She is shunned by others in her hometown for being a sorcerer who doesn’t mince words and does nothing but research, but that’s just fine by her. Rita tends to adopt a frosty, cool disposition, but if you so much as mention research, you’re in for an impassioned lecture!

“Humans work a lot harder when they get rewarded, don’t they? “

Raven is an elusive, suspiciously dressed older man with a seemingly one-dimensional personality, yet he’s anything but shy. Though he keeps the world at arm’s length, he doesn’t seem to do so out of malice. He wields both a bow and short sword in battle, adding just one more layer to a man Yuri and crew may never fully understand. 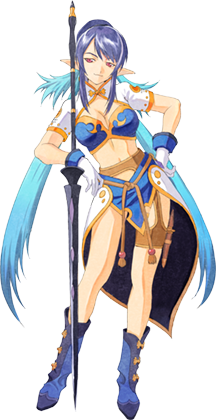 “If our paths are the same, I’ll travel with you. If I didn’t think they were…I wouldn’t be here.”

Judith is a Krityan spear wielder who meets Yuri and his crew while wandering the world. She often acts impulsively and says exactly what’s on her mind, which makes her difficult to get close to. Yuri simply calls her Judy.

“Tomorrow is another day. What will be will be.”

Patty Fleur is a self-proclaimed adventurer traveling the world in search of the legendary treasure left behind by the Aifread pirates. She speaks in riddles that obscure her true intentions and sound like they’ve come from the mouth of a woman many times her age, to boot. She’s unpredictable in battle thanks to the seemingly endless array of items she can pull from her bag. She’s equally handy with a blade or pistol, but her true weakness is for the Japanese dish oden.