What Is a Skirmish?

Skirmishes are large-scale battles in which Evan takes command of several units of troops and attempts to guide his army to victory. You can take part in a skirmish anywhere you see a battle standard planted in the ground. 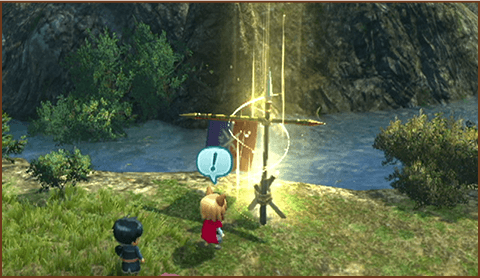 The briefing screen will give you information about a skirmish before you send your troops into battle, including the shape and size of the battlefield and the makeup of the enemy forces. Select “Mobilize Forces” to take to the battlefield.

Military Might and Kingsguilders (KG)
Military might is used to carry out your units’ special tactics, and to call on reinforcements when required.
The amount of military might available to you will differ from skirmish to skirmish.

Map
The location of your troops is indicated by

Bolster Forces: Here, you can spend kingsguilders to activate various effects to help you in the upcoming battle.
Inspect Forces: Here, you can see all the units taking part in the battle on yours and the opposing side. Moving the cursor will show you where the highlighted unit is deployed on the map.
Muster Forces: Choose which units you’ll be taking into battle.
Mobilize Forces: Take to the battlefield.

You can take up to four units into battle with you. To choose which ones, you can select “Muster Forces” from the briefing menu, or from the main menu.
The four slots each correspond to the button used to trigger that unit’s special tactic, so bear this in mind when assigning units to slots. 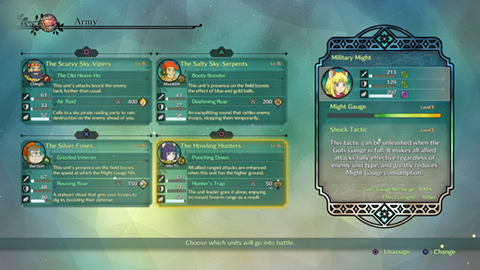 : Agility
The total of all your units’ parameters will be displayed on the right of the screen.

Unit Level
Units will level up after defeating a certain number of enemies, gaining improvements to their attack and defense.

Special Tactics
Details of the unit’s special tactic and how much military might it uses will be given here.

During a skirmish, you’ll see Evan at the center of his forces and the battlefield around them.

Units
An icon representing each unit’s type will appear above the unit.

The Guts Gauge
Defeating enemy units and destroying enemy installations will cause this to fill. When it fills completely, you’ll be able to initiate shock tactics.

The Might Gauge
This will empty when you quick-march and perform all-out attacks, but will fill back up again as time passes.

Each melee unit type is strong against certain rival unit types, and weak against others.

Use the left stick to move Evan and have his forces move with him. Use the

buttons to rotate the arrangement of units around him.

button while moving will give the order to quick-march, causing your forces to move at double speed until you release the button. Holding the

button will open the special tactics palette. Pressing the 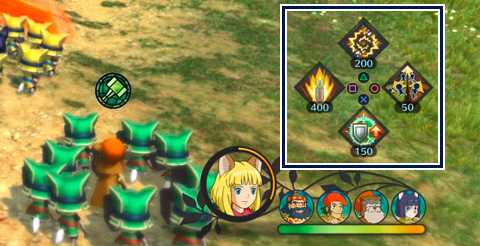 Button will call for reinforcements, bringing backup soldiers running to replenish any depleted units. This will cost differing amounts of military might depending on the number of reinforcements required.

When the guts gauge is full, you can press the

button to initiate shock tactics, which will cause all unit types to be effective against all others, and allow you to quick-march and perform all-out attacks without the might gauge being depleted.