Pressing the touch pad button while out in the field will open the main menu, from which various other submenus can be accessed. You can also check on various information, such as how much money you have.

: Guilders (G). This is the currency used to make purchases in shops and elsewhere.

: Kingsguilders (KG). This is a special currency used for expenses related to the running of your kingdom.

: Tokens of Gratitude (ToG). These are earned by completing errands at Swift Solutions, and can be used to scout new citizens, or exchanged for items.

Battle Party Members
You can change the members of your battle party in the “Party” section of the menu.

Member Status
The effects of any food party members have eaten will be displayed to the right of their HP gauge.
You can check what these effects are in the “Party” and “Items” sections of the menu.

Choose the equipment and skills your party members will use. (For more details, see here.）

Choose which party members and higgledies will accompany you into battle. (For more details, see here.）

buttons to cycle through item categories and take a look through your possessions. You can also use consumable items here.
Items of equipment can also be “locked” here in order to prevent you from accidentally selling or discarding them (locked items will be marked with 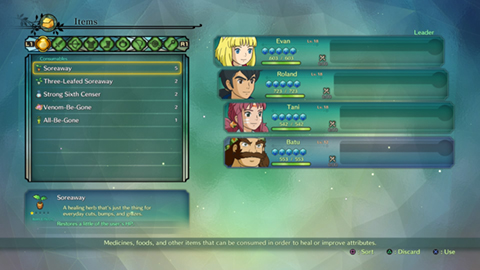 Here, you will find a list of any quests that are currently underway, as well as those you’ve already completed. In addition to checking each quest’s completion status and available rewards, you can set one as your “active” quest. This will cause it to be marked on your map, and its objective displayed on-screen.

This is a mysterious tablet, only available to those who have forged a bond with a kingmaker, which you can use to adjust various aspects of battle to your liking. (For more details, see here.）

This part of the menu allows you to choose which units will go with you into the large-scale army-based battles known as skirmishes, and to check the attributes and abilities of the units available to you. (For more details, see here.）

The Higgledy Almanac: Check the details of any higgledies who have chosen to join you on your journey.
Citizen Almanac: Check the details of everyone who has decided to come and live in your kingdom.
Tainted Monsters: A list of all the monsters infected with darkness that you have encountered in the world. Defeating them will earn you rewards in the form of equipment and other goodies.
Leafbook: A network, accessed via a magical terminal, on which people can share news, thoughts, and opinions.
Vital Statistics: Allows you to keep track of various statistics related to your adventure, such as how long you’ve been playing, and how many tainted monsters you’ve defeated.
Help: Read up on the game controls and the ins and outs of how everything works.

Pressing the OPTIONS button on the main menu will open the system menu, from which you can save, load (both manually and auto-saved games), and adjust various system-related settings. You can also return to the title screen from here. 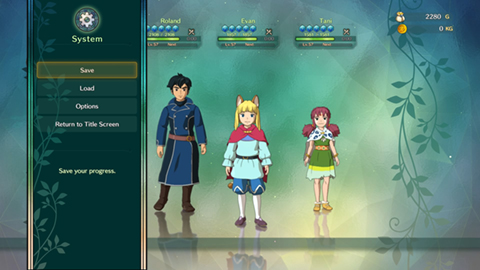 Here, you can choose the equipment and skills your party members will use. Press the

buttons to cycle through the characters in your party.
You can also change your weapon-switching settings on this screen by pressing the

Equipment/Skills List
Shows you what equipment and skills each character is currently using. Press the

buttons to cycle through weapons, armor, and skills.

Character Appearance
You can use the right stick to rotate the character.

Character Status
This shows the characters’ levels, HP, MP, and other parameters.
Once you have found some of your characters’ special outfits, you will also be able to cycle through them with the OPTIONS button.

Melee Attack Strength: Indicates how much damage will be inflicted by attacks with swords, axes, etc.

Ranged Attack Strength: Indicates how much damage will be inflicted by attacks with bows, guns, etc.

Magical Attack Strength: Indicates how much damage will be inflicted by spells and abilities.

Physical Defense: The higher this number, the less damage will be taken from physical attacks.

Magical Defense: The higher this number, the less damage will be taken from spells and abilities.

Each character can equip up to three melee weapons, one ranged weapon, and one each of the following: bodywear/armor, foot/legwear, rings, and necklaces/pendants.

Equipment Name
The color of a piece of equipment’s name indicates its quality, ranging from white for everyday items, on up through blue, red, and purple.

Rarity
This indicates how hard to find a given item is. The more stars, the rarer.

Times Improved/Improvement Limit
Once Evan has built an outfitter’s and a weapon workshop in his kingdom, he will gain the ability to improve items of equipment.

Equipment Parameters
The icons for these are the same as those for character parameters.

Zing-Related Information
The higher a weapon’s “Charge Build” rating, the more quickly it will accumulate Zing. There are seven ratings, ranging from F (slowest), up through E, D, C, B, A, and S (fastest). The number above this rating shows you the current Zing percentage of the selected weapon.

Equipment Effects
Weapons and armor can have up to two supplementary effects. When one of these is listed as “???,” you’ll need to take the item of equipment in question to the outfitters or the weapon workshop and opt to unlock the unidentified weapon or armor skill in order to use it.

Each character can assign up to four skills, one for each of the buttons shown on the skill palette.

Effect When Higgledies Are Absorbed
If a skill can be improved by absorbing higgledies, the name, elemental affinity, and power of the improved skill will be displayed here. The number to the left of this tells you how many of which type of higgledy will need to be absorbed in order to obtain the desired effect.

Skills are divided into weapon-specific abilities and standalone spells.
Some are learned when leveling up, while others will have to be developed in the spellworks in Evan’s kingdom.

In this submenu, you can choose which party members and higgledies will join you in battle. Party members are displayed on the left, while higgledies appear to the right.

Evan and His Companions
The top three party members will take part in battle, while those below will remain in reserve, earning reduced experience. The topmost character is considered the party leader, and this is who you will control when battle begins.
To swap any two characters’ positions in the lineup, simply select one and then the other.

Current Higgledy Heroes
A higgledy hero can be assigned to each of the four slots.

To change a higgledy hero, simply select the relevant slot, then pick a higgledy from the list.
Bear in mind that each hero has an assignment cost, and that the total of your four heroes cannot exceed the maximum cost displayed at the top of the column.

Total No. of Followers/Maximum No. of Followers
This tells you how many higgledy helpers each higgledy hero has amassed. These will be depleted when your little friends are attacked by enemies in battle, but can be restored by collecting higgledy balls.

Level
Once you have built a higglery in Evan’s kingdom, you can nurture your higgledy heroes in order to increase their levels, making them all the more effective in battle.

Elemental Affinities
If a higgledy hero is associated with a particular element, the icon representing that element will appear here.

Higgledy Parameters
Here, you can check on your higgledies’ personalities, and also take a look at their offensive and defensive capabilities. Their various skills and abilities are listed beneath, and you can cycle through these with the

button to learn more about them.

Abilities (Top Left, Top Right): These are abilities that the higgledy in question will use automatically in battle.
Special Commands (Bottom Left): Special skills that can be activated by pressing the

button.
Awakening Skills (Bottom Right): Special skills that will be activated when the player is awakened.

The Tactic Tweaker is a mysterious tablet only available to those with kingmakers that allows them to adjust the conditions of battle to their liking.
You can see a list of what effects are currently active by pressing the

button on the Tactic Tweaker screen.

Current Battle Points and Kingsguilders
Battle points are used to unlock and adjust the various settings on the Tactic Tweaker. You will earn them as the characters in your party level up.

Monster Affinities
These sliders will cause more damage to be inflicted on the monster types toward which they are moved. For example, moving the “Nature Vs. Nobility” slider to the left will cause you to inflict more damage on monsters of the natural family, while moving it to the right will give a damage bonus against reptilian foes.

Spoils Settings
The direction of these switches will influence the proportion of each of the spoils of battle you’ll receive. There are four categories: money, experience, rare materials and rare equipment. For example, moving the “Cash Vs. Kit” slider into the up position will cause you to earn more guilders, while moving it down will result in more rare equipment being earned.

Arts of War
These sliders will increase various aspects of battle performance the more they are moved upward. For example, moving the “Durability” slider up will increase the amount of damage prevented by blocking.

In order to adjust the various Tactic Tweaker settings, you will first need to spend battle points to unlock them. Once they are unlocked, you will be able to move the various sliders and switches, but each adjustment will cost you further battle points.
PLEASE NOTE: You can spend kingsguilders to reset your battle point allocations at any time.

In order to move these switches, you’ll need to unlock them one by one by pressing the

button and selecting the switch in question.
You can then toggle the switch between its two settings in order to activate its effect.