Upon loading, the title screen will appear.
If it’s your first time playing, you’ll need to select “New Game.”

Continue: Select this option to carry on playing from a save created during a previous play session.
You can also load autosave data using this option.
PLEASE NOTE: If no save data is present, this option will not be displayed.

New Game: Select this option to play the game from the beginning.

buttons to cycle between two pages containing a variety of options and settings. On the “Game Settings” page, you can modify camera behavior, turn the vibration function on or off, and select various audiovisual options. On the “Wireless Controller” page, you can choose between two preconfigured control schemes.

Licenses: Check the details of various software licenses pertaining to the game.

You can record your progress by selecting “Save” from the system menu when out in the field or in some towns and buildings. The system menu can be accessed by pressing the touch pad button and then pressing the OPTIONS button.
You will also be able to save your progress at certain other key points during the game, and the autosave system will regularly record your progress as well.
PLEASE NOTE: When your game is being saved, an icon will appear at the left of the screen. Please do not turn off your PlayStation®4 system or exit the game while saving is underway, as you risk corrupting your save data.

While traveling through dungeons and other locations, you’ll often come across mysterious monoliths known as waystones. Examining these will fully restore your party’s HP, and will also offer you an opportunity to save your progress. 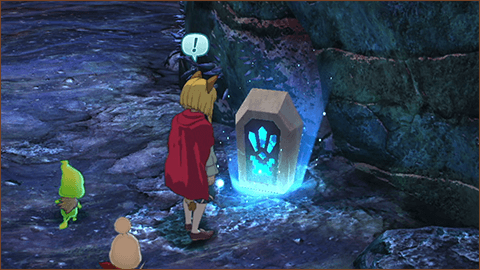 Join Evan and his friends on a magical journey through a fantastic fairy-tale world filled with people to meet and quests to complete. It promises to be a long and winding road, but the further you progress in your adventure, the more incredible features you’ll uncover! 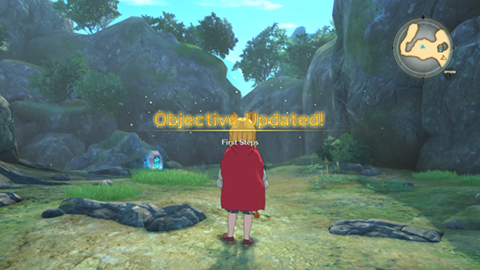 PLEASE NOTE: Some of the game features described in this manual will not be available at first, but will be unlocked as the story progresses.

As Evan and his friends defeat enemies in battle, they will earn experience points, and the same is true of units fielded in skirmishes.
When a character or unit earns enough experience, their level will increase, resulting in a boost to all their attributes. 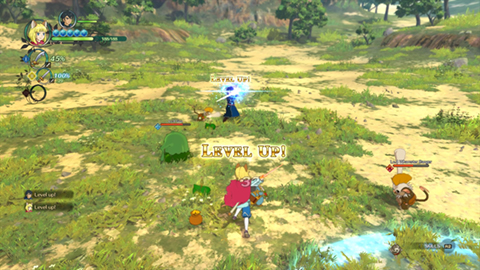 Improve Your Kingdom to Make for Smoother Adventuring

As you develop your kingdom, various avenues of research will become available, unlocking all manner of bonuses, extra items, and other treats. These will allow you to create new equipment, and to enjoy a whole host of benefits that can help Evan on his adventure, including the ability to improve your higgledy heroes. 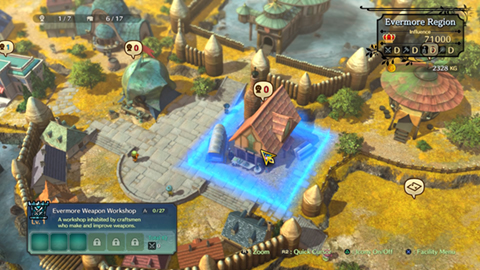 The controls described here are those used for the “Type A” configuration.

Button: When Held: Block
In Combination with Left Stick: Dodge

Button: When Held: Call for Reinforcements
When Held Next to Destroyed Installation: Rebuild

These are some more general controls for menu navigation and other situations. Any controls not covered here will be explained in the help text at the bottom-right of the screen.

Getting Around the Game World

On the world screen, you can guide Evan as he makes his way across the vast landscapes of his kingdom and beyond. At first, you’ll be exploring on foot, but as the story progresses, boats and even airships will become available.

Monsters
Walking into an enemy in the field will initiate a battle. When a foe notices Evan and his friends, an exclamation mark will appear above their head, and they will give chase, but as our heroes grow stronger, weaker opponents will begin to avoid them.

Current Objective
Displays the next objective for your currently active quest. This can be selected from the “Quests” section of the menu.

When in dungeons, towns, and certain buildings, the camera position and screen display will change, and you will be able to perform some of the actions you can usually only perform in battle.  (For more details, see here.） 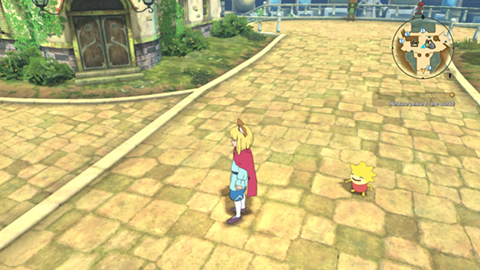 The mini-map in the top-right of the screen shows the immediate surroundings of the character you’re currently controlling. Enemies will appear as

marks, while any other entities will be indicated by

icons.
PLEASE NOTE: You can set whether or not the mini-map turns with the character you are controlling in the “Options” menu. 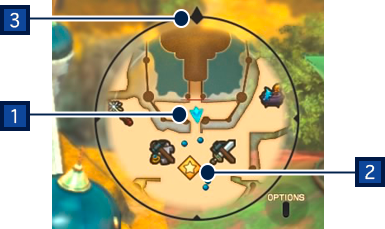 Position and Orientation of Character Being Controlled

Objective
When an objective appears outside the scope of the mini-map, its direction will be indicated with

When out and about in the world, you can press the OPTIONS button to open up a detailed map showing your surroundings and the names of any known locations nearby. Only areas you have visited will be displayed. 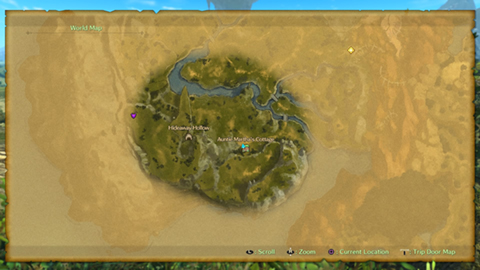 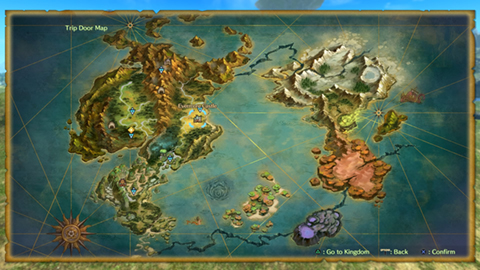 Trip doors are special spots dotted around the world that you can examine in order to have them remember you. Once they have, you’ll be able to teleport back to them instantly from almost anywhere. 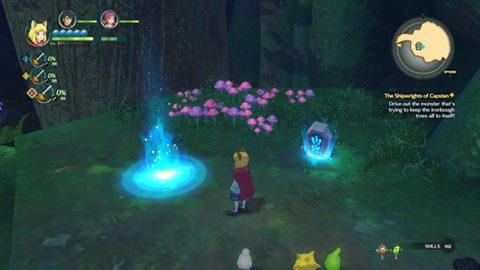