Making contact with monsters when out in the world or approaching them when in a dungeon will initiate a battle.

Damage
Damage inflicted on enemies will be displayed in white, while damage taken by allies will appear in red. If the number appears in yellow, it means that attack is particularly effective against that enemy.

Enemies
Enemies’ names, levels, and HP gauges will be displayed above their heads. The icon to the left of the HP gauge indicates the family of the enemy you’re dealing with.

Higgledy Heroes
The colored frame surrounding a higgledy hero indicates its elemental affinity, while the number tells you how many followers, or higgledy helpers, it has.

Above and to the right of the icon indicating the character you’re controlling, you’ll see icons representing any characters currently accompanying you, along with their HP gauges.

MP
MP, or magic points, are used up every time you unleash a skill or perform a ranged attack, and are recharged by performing melee attacks on foes.

Current Level and Experience Gauge
Winning battles will gradually fill up your characters’ experience gauges, until eventually their levels increase.

Allies’ HP Gauges
You can swap between controllable characters in battle by using the up and down directional buttons.

HP Gauge
This indicates a character’s current level of physical health—the number to the right shows their current HP, along with their maximum HP. The gauge will empty as they take damage from enemy attacks, and if it empties completely, that character will be unable to continue fighting.

The arms band allows you to equip up to three melee weapons (swords, axes, etc.) simultaneously and swap between them instantly in battle.

Weapon Icon
This indicates the type of weapon being used.

Current Zing Level
This will increase as you perform melee attacks on enemies.
PLEASE NOTE: Zing will also increase for weapons not being used, but at a reduced rate.

Weapon Attack Power
The basic attacking strength of a weapon before Zing bonuses are taken into account.

When a weapon’s Zing gauge fills, its icon will begin to glow, and it will enter an especially powerful state.
Weapons at full Zing will inflict more damage, and will also increase the power of any skills used (including ranged skills).
Note, however, that using a skill while at full Zing will instantly reset the gauge to 0%.

You can switch between the three melee weapons equipped to your arms band as required. There are three switching methods available, which can be cycled through using the OPTIONS button.
PLEASE NOTE: You can also change weapon-switching settings in the “Equipment & Skills” menu.

button to cycle through your three equipped weapons in order.
Semi-Automatic (Default Setting): The same as Manual, but will automatically switch to the next weapon when the current weapon’s Zing is reduced to 0% through the use of a skill.
Automatic: Completely automates weapon-switching.

When you defeat enemies, they will drop money (guilders, or G) and items. To pick these up, simply walk over them.
When you have defeated all enemies, the battle will end, and you will return to the world map/dungeon. You’ll also earn experience points for every enemy you beat, and any characters who fill their experience gauges by doing so will level up, improving their all-round attributes and occasionally giving them access to new skills.
PLEASE NOTE: Party members not taking part in battle will also earn experience points, but at a reduced rate.

Should a character’s HP be reduced to zero, they will no longer be able to fight. If this happens to the character you are controlling, you will automatically switch to the next available character.
If all three characters are defeated, it’s game over. You will then have to reload from the last place you saved, although in some boss battles, it will also be possible to opt to retry the battle instead, beginning again with full HP.

Some enemies will have specific elemental affinities. Your party members can increase their resistance to specific elements by equipping certain items or enlisting the aid of higgledies of that element. This can significantly reduce the amount of damage taken from the enemy in question.

Certain enemy attacks will afflict their targets with ailments that can cause serious inconvenience. The effects of most of these ailments will naturally wear off after a short period of time, but they can also be cured instantly using specific items.

Freezing: The character is frozen solid, stopping them from moving altogether. They will thaw out after a while, but can also be freed when an enemy attack inflicts heavy damage.

Sleep: The character falls into a deep slumber, and is unable to act. This renders them more vulnerable to damage, but taking a hit may also wake them up.

Confusion: The character becomes befuddled, causing the direction in which the left stick will move them to be reversed.

Nixing: The character is prevented from using any spells or skills.

Poison: The character is envenomated, sustaining continuous damage over a period of time. The effect can persist even after battle ends.

You may also come across other ailments, some of which can’t be cured by items, or which are brought on under certain specific conditions.

KO: The character is knocked unconscious, and unable to act. They will come around naturally after some time, or by taking a big hit from an enemy.
Soaking: The character is drenched through, making them extremely vulnerable to any attacks with a freezing effect.
Frazzling: The character is set on fire, sustaining continuous damage over a period of time. The effect can persist even after battle ends.

The controls described here are those used for the “Type A” configuration. You can opt to use “Type B” controls instead by changing the configuration in the “Options” menu.

button that inflict smaller amounts of damage, or slower but more damaging attacks performed with the

button.
Ranged attacks can be used to attack enemies from afar by pressing the

button, at the cost of MP. You can also hold the

button to charge up an extra-powerful ranged attack.

button will cause the character you are controlling to block, limiting their movement, but reducing damage taken from enemy attacks. Pressing the

button while moving, on the other hand, will cause them to roll or otherwise dodge in the direction of movement, enabling them to avoid enemy attacks entirely.

Locking On to Enemies

button will cause a target marker to appear on the nearest enemy, indicating that you have locked on to them. This will cause them to remain in view at all times, and will enable you to concentrate all of your attacks on them.
Pressing the left and right directional buttons when locked on will cycle through available targets, while pressing the 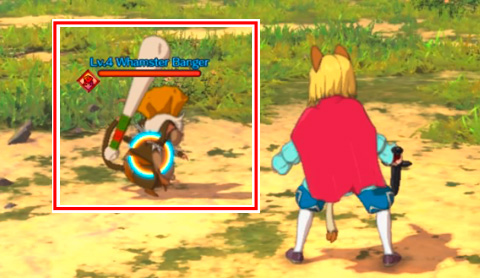 button will cause the skill palette to appear in the bottom-right of the screen.
Pressing the button corresponding to a skill (

) will trigger the spell or ability assigned to that button, consuming MP in the process. 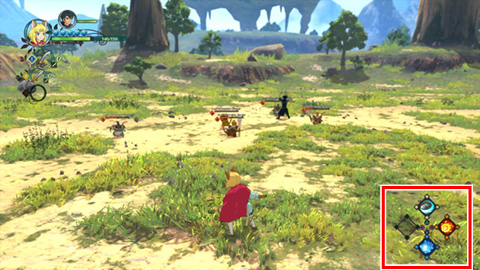 When triggering certain skills, holding down the assigned button will cause you to absorb nearby higgledies.
Doing so can increase the impact of the skill in question, or even change its effect entirely.

Instructing Your Higgledies to Act

Your higgledy friends will perform various helpful actions in battle, including attacking enemies and unleashing special support skills. You can also have them trigger extra-special abilities by running up to them when a blue circle appears around them, and pressing the 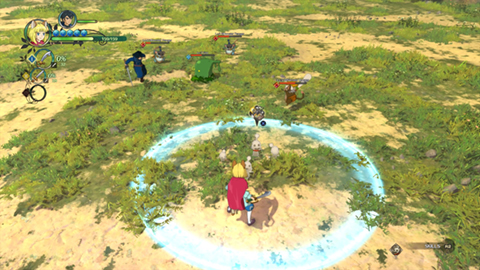 Pressing the touch pad button during battle will cause the action to pause, and the item menu to open. Here, you can make use of various items to restore your characters’ HP, cure status ailments, etc. 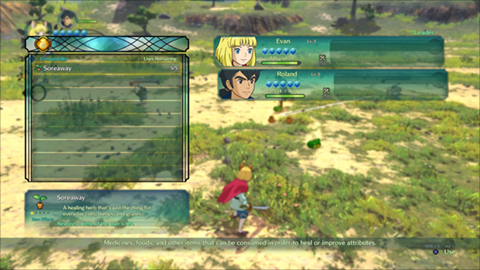